The city of Amsterdam envisions a future where fleets of autonomous boats cruise its many canals to transport goods and people, collect trash, or self-assemble into floating stages and bridges.

To further Amsterdam's vision, MIT researchers have given new capabilities to their fleet of robotic boats — which are being developed as part of an ongoing project — that lets them target and clasp onto each other, and keep trying if they fail.

About a quarter of Amsterdam’s surface area is water, with 165 canals winding alongside busy city streets. Several years ago, MIT and the Amsterdam Institute for Advanced Metropolitan Solutions (AMS Institute) teamed up on the “Roboat” project. The idea is to build a fleet of autonomous robotic boats — rectangular hulls equipped with sensors, thrusters, microcontrollers, GPS modules, cameras, and other hardware — that provides intelligent mobility on water to relieve congestion in the city’s busy streets.

One of project’s objectives is to create roboat units that provide on-demand transporation on waterways. Another objective is using the roboat units to automatically form “pop-up” structures, such as foot bridges, performance stages, or even food markets. The structures could then automatically disassemble at set times and reform into target structures for different activities. Additionally, the roboat units could be used as agile sensors to gather data on the city’s infrastructure, and air and water quality, among other things.

In 2016, MIT researchers tested a roboat prototype that cruised around Amsterdam’s canals, moving forward, backward, and laterally along a preprogrammed path. Last year, researchers designed low-cost, 3-D-printed, one-quarter scale versions of the boats, which were more efficient and agile, and came equipped with advanced trajectory-tracking algorithms.

In a paper presented at the International Conference on Robotics and Automation, the researchers describe roboat units that can now identify and connect to docking stations. Control algorithms guide the roboats to the target, where they automatically connect to a customized latching mechanism with millimeter precision. Moreover, the roboat notices if it has missed the connection, backs up, and tries again. 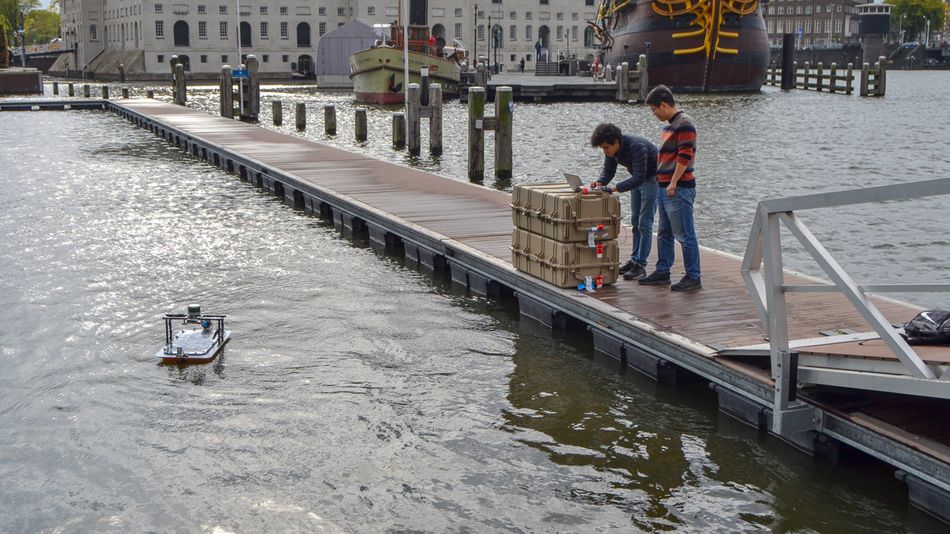 The researchers tested the latching technique in a swimming pool at MIT and in the Charles River, where waters are rougher. In both instances, the roboat units were usually able to successfully connect in about 10 seconds, starting from around 1 meter away, or they succeeded after a few failed attempts. In Amsterdam, the system could be especially useful for overnight garbage collection. Roboat units could sail around a canal, locate and latch onto platforms holding trash containers, and haul them back to collection facilities.

“In Amsterdam, canals were once used for transportation and other things the roads are now used for. Roads near canals are now very congested — and have noise and pollution — so the city wants to add more functionality back to the canals,” says first author Luis Mateos, a graduate student in the Department of Urban Studies and Planning (DUSP) and a researcher in the MIT Senseable City Lab. “Self-driving technologies can save time, costs and energy, and improve the city moving forward.”

“The aim is to use roboat units to bring new capabilities to life on the water,” adds co-author Daniela Rus, director of the Computer Science and Artificial Intelligence Laboratory (CSAIL) and the Andrew and Erna Viterbi Professor of Electrical Engineering and Computer Science. “The new latching mechanism is very important for creating pop-up structures. Roboat does not need latching for autonomous transporation on water, but you need the latching to create any structure, whether it’s mobile or fixed.” 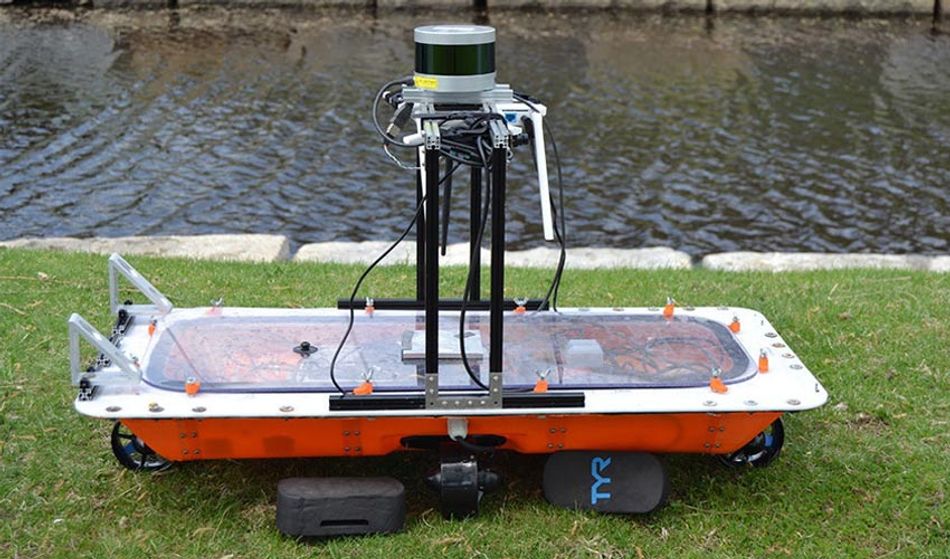 Each roboat is equipped with latching mechanisms, including ball and socket components, on its front, back, and sides. The ball component resembles a badminton shuttlecock — a cone-shaped, rubber body with a metal ball at the end. The socket component is a wide funnel that guides the ball component into a receptor. Inside the funnel, a laser beam acts like a security system that detects when the ball crosses into the receptor. That activates a mechanism with three arms that closes around and captures the ball, while also sending a feedback signal to both roboats that the connection is complete.

On the software side, the roboats run on custom computer vision and control techniques. Each roboat has a LIDAR system and camera, so they can autonomously move from point to point around the canals. Each docking station — typically an unmoving roboat — has a sheet of paper imprinted with an augmented reality tag, called an AprilTag, which resembles a simplified QR code. Commonly used for robotic applications, AprilTags enable robots to detect and compute their precise 3-D position and orientation relative to the tag.

Both the AprilTags and cameras are located in the same locations in center of the roboats. When a traveling roboat is roughly one or two meters away from the stationary AprilTag, the roboat calculates its position and orientation to the tag. Typically, this would generate a 3-D map for boat motion, including roll, pitch, and yaw (left and right). But an algorithm strips away everything except yaw. This produces an easy-to-compute 2-D plane that measures the roboat camera’s distance away and distance left and right of the tag. Using that information, the roboat steers itself toward the tag. By keeping the camera and tag perfectly aligned, the roboat is able to precisely connect.

The funnel compensates for any misalignment in the roboat’s pitch (rocking up and down) and heave (vertical up and down), as canal waves are relatively small. If, however, the roboat goes beyond its calculated distance, and doesn’t receive a feedback signal from the laser beam, it knows it has missed. “In challenging waters, sometimes roboat units at the current one-quarter scale, are not strong enough to overcome wind gusts or heavy water currents,” Mateos says. “A logic component on the roboat says, ‘You missed, so back up, recalculate your position, and try again.’”

The researchers are now designing roboat units roughly four times the size of the current iterations, so they’ll be more stable on water. Mateos is also working on an update to the funnel that includes tentacle-like rubber grippers that tighten around the pin — like a squid grasping its prey. That could help give the roboat units more control when, say, they’re towing platforms or other roboats through narrow canals.

In the works is also a system that displays the AprilTags on an LCD monitor that changes codes to signal multiple roboat units to assemble in a given order. At first, all roboat units will be given a code to stay exactly a meter apart. Then, the code changes to direct the first roboat to latch. After, the screen switches codes to order the next roboat to latch, and so on. “It’s like the telephone game. The changing code passes a message to one roboat at a time, and that message tells them what to do,” Mateos says.

Darwin Caldwell, the research director of Advanced Robotics at the Italian Institute of Technology, envisions even more possible applications for the autonomous latching capability. “I can certainly see this type of autonomous docking being of use in many areas of robotic ‘refuelling’ and docking … beyond aquatic/naval systems,” he says, “including inflight refuelling, space docking, cargo container handling, [and] robot in-house recharging.”

The biggest mystery in the Universe could possibly be right here on Earth. According to the National Oceanic and Atmospheric Administration (NOAA) as much as 95% of the oceans and 99% of the ocean floor has yet to be explored.