When lorry drivers are turning right, they check up to five mirrors to see if there are cyclists in their immediate vicinity. Despite the many mirrors, cyclists are still killed in right-turn accidents every year because—in the words of the Danish Road Traffic Accident Investigation Board—‘it is almost impossible to look in the right mirrors at the right time when you are turning a big lorry’.

Three DTU students are attempting to address this challenge using a combination of virtual reality glasses and several cameras mounted on the outside of the lorry to create the illusion of a transparent vehicle.

“We want to create a solution that makes it safer to be a cyclist and easier to be a lorry driver. We have the impression that constantly familiarizing yourself with many mirrors—especially in city driving—can be very stressful. We hope that our AR glasses can give drivers a quicker and easier overview of what is going on around them,” says Tanja Lind Hansen, founder and CFO of the start-up AUGIT Solutions which develops the glasses.

The students have tested the glasses in collaboration with the United Federation of Danish Workers (3F) and the Danish Transport and Logistics Association (DTL) at TEC—Technical Education Copenhagen – Hvidovre’s test circuit. The test showed that a total of 15 lorry drivers made or nearly made 43 errors when using the mirrors and ten when they used the AR glasses in the same trial.

“Our impression is that the drivers still feel more secure using mirrors because many of them have grown accustomed to a routine over the course of a long working life. At the same time, they thought that the glasses had great potential—a fact borne out by the far fewer errors in our trial,” says Dan Roland Persson, CEO of AUGIT Solutions.

Dan and Tanja are taking an MSc in Digital Media Engineering at DTU Compute together with the third member of the group—Thomas Bjelbo Thomsen.

Took student project to next level
Dan, Thomas, and Tanja got the idea to develop the system when they brainstormed on a project for a course in ‘user experience’ at DTU Compute. The lecturer believed their idea had so much potential that the trio were subsequently assigned to a special course where they could focus on developing the AR system.

The group held the theory that a camera on the front and sides of the lorry would remove more blind spots than mirrors. They therefore tried to throw live recordings from the cameras up on to the lenses in a digital frame which gave the drivers the experience of being able to look through the sides of the lorry when checking their surroundings. There was just one problem—they did not have a lorry they could test it on. 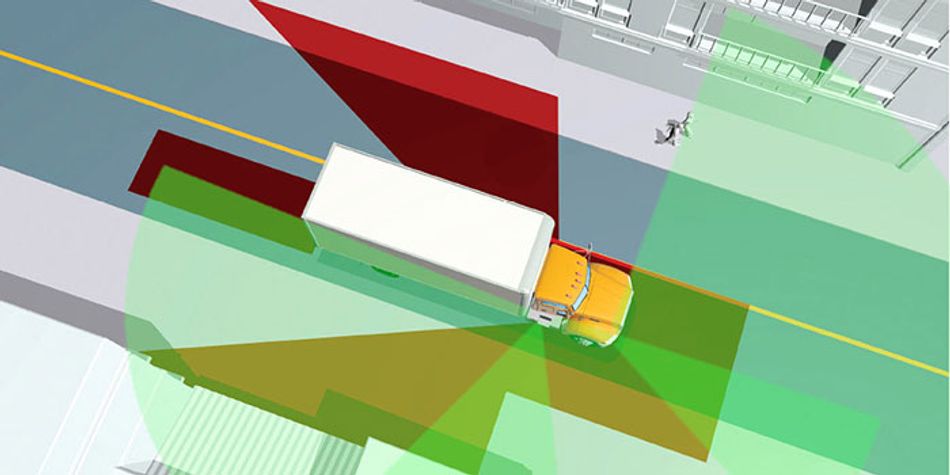 “We tried to recreate the lorry’s blind spots in Tanja’s Ford Ka by covering selected areas of the windows with black plastic bags. Back then we only had a very cheap pair of VR glasses, so the result was less than optimal. But despite the limitations of our initial test, it nevertheless showed that the error rate was significantly lower when using the glasses, which led us to believe that we were really onto something,” says Thomas Bjelbo Thomsen.

It quickly became clear that it was not only the project participants who saw potential in the system. The group has since raised EUR 8,000 (DKK 60,000) of funding, won an award on the entrepreneur course Skylab Ignite, and had an extensive article about their project published in the Danish daily Politiken. And, as previously mentioned, they also attracted interest from 3F and Danish transport and Logistics, both of which have helped to test the group’s product on real lorries.

“We’re really proud that others have believed so much in our project and that we’ve been able to take it as far as we have. So now we’re going all the way, and the next step is to attract more partners and more funding and further develop our glasses because there’s still a lot that needs to be improved,” says Thomas, mentioning, for example, that the glasses must be smaller and easier to wear.

Dan and Thomas are currently working on the invention as part of their MSc thesis, while Tanja is continuing to work on the project alongside her studies. Right now she is developing sensors for the lorry that can send warnings to the glasses if cyclists come too close.

“We tried to implement a warning tone if the sensors registered that something came too close to the lorry, but it distracted the driver too much. So now we’re trying to incorporate a visual warning into the lens instead,” Tanja says.

The Danish Road Directorate’s statistics show that in the past ten years, an average of 4.8 cyclists have been killed per year in right-turn accidents in Denmark.

Low-cost head-up display for use in cars, trucks and trains wins investment