An example of a flexible gas sensor worn over a knuckle. Image: Cheng Lab, Penn State

A stretchable, wearable gas sensor for environmental sensing has been developed and tested by researchers at Penn State, Northeastern University and five universities in China.

The sensor combines a newly developed laser-induced graphene foam material with a unique form of molybdenum disulfide and reduced-graphene oxide nanocomposites. The researchers were interested in seeing how different morphologies, or shapes, of the gas-sensitive nanocomposites affect the sensitivity of the material to detecting nitrogen dioxide molecules at very low concentration. To change the morphology, they packed a container with very finely ground salt crystals.

Nitrogen dioxide is a noxious gas emitted by vehicles that can irritate the lungs at low concentrations and lead to disease and death at high concentrations. 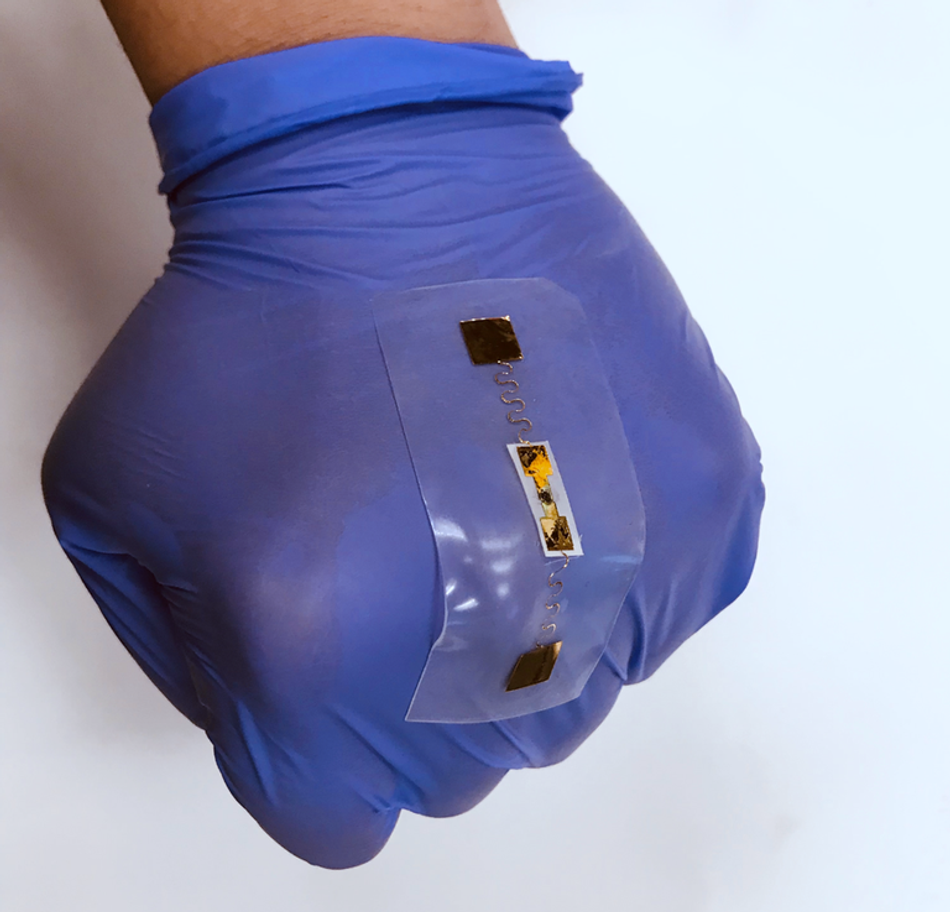 When the researchers added molybdenum disulfide and reduced graphene oxide precursors to the canister, the nanocomposites formed structures in the small spaces between the salt crystals. They tried this with a variety of different salt sizes and tested the sensitivity on conventional interdigitated electrodes, as well as the newly developed laser-induced graphene platform. When the salt was removed by dissolving in water, the researchers determined that the smallest salt crystals enabled the most sensitive sensor.

“We have done the testing to 1 part per million and lower concentrations, which could be 10 times better than conventional design,” says Huanyu Larry Cheng, assistant professor of engineering science and mechanics and materials science and engineering. “This is a rather modest complexity compared to the best conventional technology which requires high-resolution lithography in a cleanroom.”

Ning Yi and Han Li, doctoral students at Penn State and co-authors on the paper in Materials Today Physics, added, “The paper investigated the sensing performance of the reduced graphene oxide/moly disulfide composite. More importantly, we find a way to enhance the sensitivity and signal-to-noise ratio of the gas sensor by controlling the morphology of the composite material and the configuration of the sensor-testing platform. We think the stretchable nitrogen dioxide gas sensor may find applications in real-time environmental monitoring or the healthcare industry.”

Other Penn State authors on the paper, titled “Stretchable, Ultrasensitive, and Low-Temperature NO2 Sensors Based on MoS2@rGO Nanocomposites,” are Li Yang, Jia Zhu, Xiaoqi Zheng and Zhendong Liu.

A new way to control experimentation with dreams

The ability to integrate location and movement sensors with wireless technology in sports equipment is revolutionizing the way athletic performance can be monitored, analyzed and improved.

To further shrink electronic devices and to lower energy consumption, the semiconductor industry is interested in using 2D materials, but manufacturers need a quick and accurate method for detecting defects in these materials to determine if the material is suitable for device manufacture.