Whether the idiosyncratic HAL 9000 in Odyssey in Space, the discreetly acting “computer” of the Enterprise or the soberly sarcastic TARS and CASE in Interstellar – in science fiction, the exploration of space has always been accompanied by artificial intelligence.

Whether the idiosyncratic HAL 9000 in Odyssey in Space, the discreetly acting “computer” of the Enterprise or the soberly sarcastic TARS and CASE in Interstellar – in science fiction, the exploration of space has always been accompanied by artificial intelligence. Although such stellar journeys are still a long way from being part of everyday spaceflight, the hostile environment in space and the complex requirements of space missions are virtually predestined for the use of AI. Because this is where the challenges of maintaining the safety of the systems and maximizing the scientific benefits are rapidly increasing.

In order to develop new AI technologies and applications for use in civil spaceflight, the European Space Agency (ESA) and the German Research Center for Artificial Intelligence (DFKI) are establishing a joint research laboratory – the ESA_Lab@DFKI. The Transfer Lab at DFKI in Kaiserslautern creates a framework in which scientists from both organizations research, among other things, AI systems for the interpretation of complex, extensive data from earth observation or for collision avoidance of satellites. 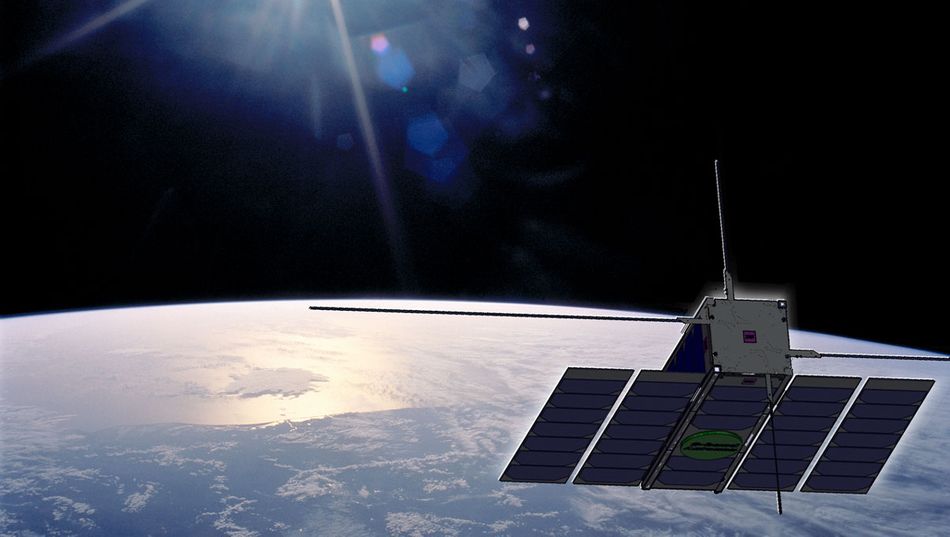 Prof. Dr. Antonio Krüger, CEO of DFKI: "AI and spaceflight belong together. AI technologies have the greatest potential where humans reach the limits of what is physically or cognitively possible. In modern spaceflight, they can play a decisive role in helping to cope with the increasing demands of ever more complex missions. In addition, technological advances in AI are enabling new projects that were unthinkable just a short time ago. Together, ESA and DFKI have already carried out or are actively involved in several successful projects, for example in the field of space robotics and long-term autonomous systems. We are all the more pleased to expand and consolidate our collaboration with the new Transferlab and thus to open up even more promising AI technologies from the broad spectrum of DFKI research for use in space."

ESA Director General Prof. Dr.-Ing. Jan Wörner emphasizes: "The use of AI will open up completely new possibilities for the entire spectrum of spaceflight. Extracting knowledge from the enormous data streams provided by Earth observation satellites as well as probes in our solar system, increasing the autonomy and reliability of satellites, and finally improving the interaction between humans and machines are such application areas. But we also see an excellent field of application for AI in the administrative sector, especially in the topic of 'knowledge management'.

Dr. h.c. Thomas Reiter, astronaut and ESA coordinator international agencies and advisor to the Director General adds: "The further we move away from Earth, the greater the need for autonomy. Therefore, especially for astronautical and robotic exploration of our neighboring planets and our solar system, AI is an extremely promising tool. The optimal interaction of man and machine, supported by AI, on board a platform orbiting the Moon, an interplanetary spacecraft, or on the surface of the Moon and Mars, in the control of robotic rovers or habitats, will become a crucial element determining mission success. We also expect critical advances in the detection of hazards in and from space through the use of AI-based techniques, such as in the analysis and prediction of space weather events. The ever-increasing number of satellites in near-Earth orbit has resulted in more and more frequent approaches or even overlapping trajectories. We also see a wide field of application for AI in analyzing collision risks and ensuring the safe operation of satellites." 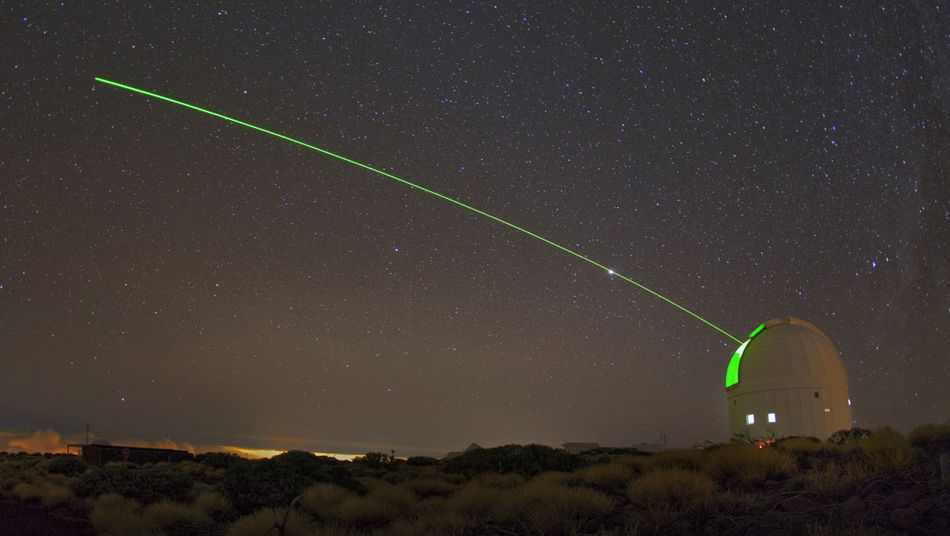 A visible green laser shone from ESA's Optical Ground Station (OGS). Part of Teide Observatory, the OGS located 2400 m above sea level on the volcanic island of Tenerife, used for the development of optical communication systems for space as well as space debris and near-Earth orbject surveys and quantum communication experiments.

Prof. Dr. Andreas Dengel, Executice Director at DFKI in Kaiserslautern and head of the Smart Data and Knowledge Services research department, says: "The possibilities for beneficial applications in space in the face of a world undergoing technological and climatic change are manifold. Equally manifold in this regard are the potential applications of AI technologies. Our Machine and Deep Learning methods, for example, are ideally suited for analyzing and interpreting the extensive and complex data from Earth observation systems, whether for climate monitoring, disaster control or agriculture. With the new Transferlab, we want to create a creative space to jointly identify sustainable cutting-edge and future needs for AI solutions in ESA projects and develop tailored space applications."

Satellites send large amounts of data back to Earth every day. Data from the European Copernicus program, for example, is freely available to users. However, this data is far too voluminous for humans to analyze on their own. AI methods can help generate valuable knowledge from the raw data. Special Machine Learning methods can be used, for example, to make dispersion and damage forecasts for environmental protection and disaster management of areas affected by natural disasters. Commercial value-added services range from financial risk assessment of such events to monitoring industrial infrastructures on Earth. Another application scenario targets security of supply through agricultural products: Growth conditions and soil qualities of cultivated areas can be analyzed to make yield forecasts. ESA's outstanding expertise in satellite-based Earth observation ideally complements the experience of DFKI scientists from pioneering projects in agriculture, such as iGreen.

Artificial intelligence for the safe operation of satellites

Another potential field of application for AI is collision avoidance of spacecraft in the face of more and more objects in Earth orbit. This is because spaceflight is facing a paradigm shift with the increased use of so-called mega-constellations. Whereas in the past, single, highly specialized, large satellites tended to be operated, the trend in international spaceflight today is toward constellations of hundreds or even thousands of small satellites. This poses new challenges for operators of space-based infrastructure, because as the number of satellites increases, so does the risk of collisions and the creation of more space debris. AI methods help to accurately calculate the orbits of active and passive satellites as well as known space debris. Thus, collisions can be prevented by evasive maneuvers.

Distribution of space debris around Earth.

Successful transfer from the research ecosystem

The partnership between ESA and DFKI in form of the ESA_Lab@DFKI will support these and other fundamental technology developments and promises to expand the range and scope of innovations transferred from academic research into advanced industrial applications.

ESA_Lab@s are joint initiatives between ESA and academic/research institutions. The institutions contribute proposals for innovative research linking space and their scientific expertise, students and teaching, while ESA contributes technical expertise from across the Agency and first-hand knowledge of the challenges facing modern spaceflight. Existing ESA_Lab@s focussing on artificial intelligence include those established with the University Oxford and University College London.

With ESA_Lab@DFKI, DFKI also relies on a proven concept in which employees of partner organizations are embedded in DFKI research teams, working in the "ecosystem" of DFKI research areas and developing concrete solutions and products in the protected data room. The identification and development of relevant technologies is thus closely intertwined with scientific progress. DFKI already maintains transfer labs with industrial companies from various sectors, such as Continental, Hitachi, IAV and Sartorius. Further cooperation with the Criminal Investigation Office of the State of Rhineland-Palatinate and the Federal Criminal Police Office is in the planning stage.

Smartfactory-Kl Is Testbed For Gaia-X

AI Vs. Cybercrime: Research Cooperation With BKA And LKA Launched

If we intend to explore the Moon or Mars, astronauts need smart habitats that will support life and remain operational when they are vacant. We are combining AI and traditional engineering to enable a habitat to process its own data and pass recommendations on to robotic systems or astronauts.

Could the same computer algorithms that teach autonomous cars to drive safely help identify nearby asteroids or discover life in the universe? NASA scientists are trying to figure that out by partnering with pioneers in artificial intelligence (AI) — companies such as Intel, IBM and Google

Using an online tool to label Martian terrain types, you can train an artificial intelligence algorithm that could improve the way engineers guide the Curiosity rover.