Better maintenance, detailed knowledge and optimized operation. In short, this is what owners of large solar farms can look forward to thanks to a project combining sensitive camera technology with professional drones to create a kind of flying sniffer dogs.

The technology, currently being developed at DTU Fotonik among others, is expected to be ready during 2019 and will radically change the service and maintenance of professional solar farms.

“The more solar cell prices fall, the bigger solar farms become—increasing the number of panels in the farms. This constitutes a major challenge with respect to maintenance and inspection,” says Gisele Benatto, postdoc and PhD at DTU Fotonik.

Today, modern solar farms have a capacity of at least 10 MW, and in many cases significantly more. The world’s largest plant in China generates 1.5 GW, and given a typical capacity of 300 W per solar panel, this amounts to an enormous number of solar cells to inspect, often under extreme conditions in the scorching sun.

“We visited a solar farm in Málaga in July last year. The temperature was 46 degrees Celsius. It is extremely demanding for people to conduct inspections under these conditions, and it takes a huge amount of time. Using the drone, we can scan the panels automatically—this is much faster and yields a more precise overview of the panels,” says Gisele Benatto.

"Using the drone, we can scan the panels automatically—this is much faster and yields a more precise overview of the panels."

Drones are already used to monitor the condition of solar farms. They can be equipped with thermographic cameras which can detect certain types of defects, but far from all.

DTU researchers have therefore developed a system based on electroluminescence. A special camera is mounted on the drone, which uses this technology to detect at least 70 per cent of potential defects compared to around 30 per cent using thermography.

“Basically, the owners get an improved and more in-depth insight into the state of health of their often extremely large investments,” explains Gisele Benatto.

The solar cells in the solar panel are normally positioned between a layer of glass on the front, which is transparent to allow the sunlight to penetrate, but protects against the elements, and a plastic foil on the back.

The actual solar cells consist of silicon wafers with a thickness of about 200 microns. These silicon wafers are particularly fragile. They may be damaged during transport, in connection with inspection or cleaning, or during extreme weather conditions such as hail.

The principle behind electroluminescence is to subject the solar cell to a weak electrical current.

This causes the panels to act as large light-emitting diodes that shine very faintly. The light is invisible to the human eye, but it is more than sufficient for the camera, which is equipped with a sapphire lens with a special coating.

The camera picks up differences in luminescence from the individual panels, providing a detailed picture of the panel’s state. For instance, defects will make panel areas appear dark, allowing the scientists to register if there is no current flow between individual parts of the panel’s circuit. 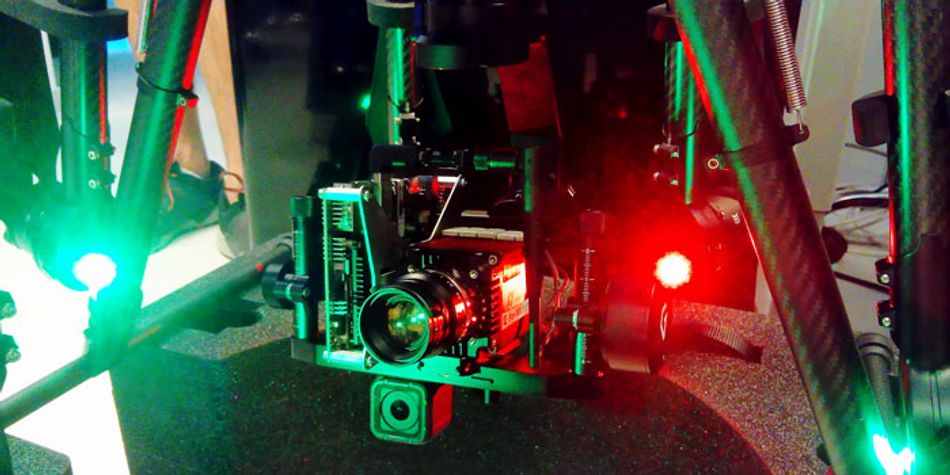 A lot of work went into integrating the camera on the drone. Photo: Giselle Benatto.

One of the business partners is the Danish company Kenergy from Horsens, which, among other things, carries out technical inspections throughout Europe.

According to CEO Kenn H.B. Frederiksen, solar panels are often checked individually using thermography. This is done either by walking around the solar farm, or with a drone.

“The physical walk takes a long time, and the drone solution only finds the visible defects. Using electroluminescence we can detect more defects and damage, e.g. microcracks that develop over time and cannot be seen by way of thermography,” Kenn H.B. Frederiksen explains.

The camera is mounted on a hexacopter drone which, at a speed of one metre per second, flies over the rows of solar cells taking pictures of the individual panels. An advanced GPS system ensures that the drone knows exactly where it is, and in time the drone speed will be increased.

Actually, electroluminescence should not be able to work during daytime, because the camera is blinded by the sunlight reflected from the solar panel.

To solve this, DTU researchers have developed a system which ensures that the camera is constantly synchronized with the solar panel and takes pictures during sequences when the current is alternately switched on and off.

This compensates for variations in the sunlight, e.g. caused by clouds. The more sunlight, the more pictures are needed to obtain an acceptable image quality—up to 100 pictures per solar panel.

“This requires better filters on the lens and more pictures when you want to make inspections during the daytime. It is one of the areas we are still working on developing and refining at the moment. We cannot fly at night, as this involves safety challenges,” explains Gisele Benatto.

DTU researchers have, among other things, developed the necessary image processing circuit for the drone as well as algorithms for the drone/panel communication, meaning that the power is connected to the panels exactly when the drone is above the panel, and the camera takes pictures.

A few seconds of recordings is enough to obtain gigabytes of data; therefore, another task is to compress the pictures to keep the system from drowning in data.

The first prototype has been installed and tested, and the image processing technology has been developed. Part of the process still needs to be automated, but the plan is for the drone to overfly solar farms in Jutland during the summer of 2019.

Kenn H.B. Frederiksen from Kenergy is looking forward to using the fully developed prototype and sees the technology as a distinct competitive advantage.

“We will be getting a new analysis tool that will detect more defects. If we can do this so precisely and so systematically that it becomes a standard in the industry, solar farm owners will be interested. They can have an inspection carried out before the warranties on their solar modules expire,” says Kenn H.B. Frederiksen. 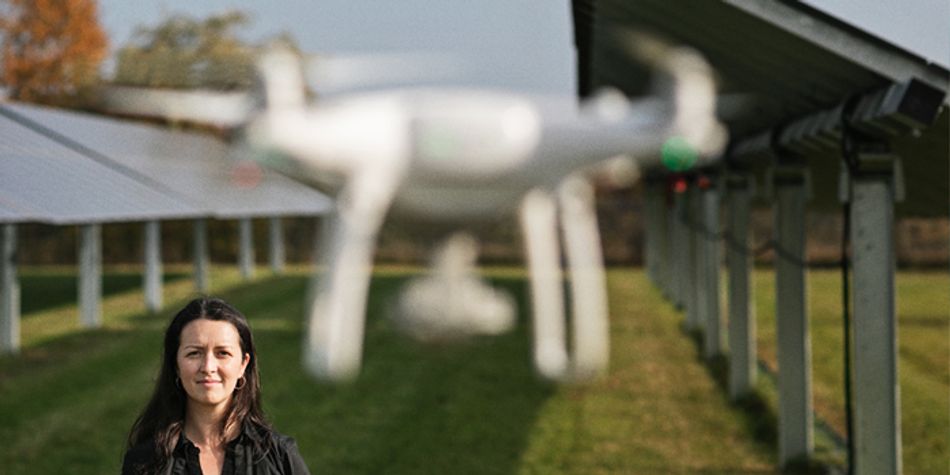 The drone is equipped with a camera which, by means of electroluminescence, finds at least 70 per cent of the defects in a solar farm. Photo: Büro Jantzen.

Gisele Benatto agrees entirely. She is already working on the next step of the project, which involves using photoluminescence to illuminate the solar panels while the drone speeds past. At the same time, machine learning will teach the system to spot defects, and this will fully automate the process, she expects:

“It is still time-consuming to connect power to the solar panels to enable us to see them with the camera. We are therefore working on illuminating the panels with a light source to allow us to carry out the inspection even faster. We hope to have this technology ready within five years or less.”

Cutting the power cord for the first untethered flight

Devorto: Building an Aircraft That Never Has to Land