NIST researcher June Lau with a transmission electron microscope (TEM) that she and her colleagues retrofitted in order to make high-quality atom-scale movies. Credit: N. Hanacek/NIST

Researchers at the National Institute of Standards and Technology (NIST) and their collaborators have developed a way to retrofit the transmission electron microscope — a long-standing scientific workhorse for making crisp microscopic images — so that it can also create high-quality movies of super-fast processes at the atomic and molecular scale. Compatible with electron microscopes old and new, the retrofit promises to enable fresh insights into everything from microscopic machines to next-generation computer chips and biological tissue by making this moviemaking capability more widely available to laboratories everywhere.

“We want to be able to look at things in materials science that happen really quickly,” said NIST scientist June Lau. She reports the first proof-of-concept operation of this retrofitted design with her colleagues in the journal Review of Scientific Instruments. The team designed the retrofit to be a cost-effective add-on to existing instruments. “It’s expected to be a fraction of the cost of a new electron microscope,” she said.

A nearly 100-year-old invention, the electron microscope remains an essential tool in many scientific laboratories. A popular version is known as the transmission electron microscope (TEM), which fires electrons through a target sample to produce an image. Modern versions of the microscope can magnify objects by as much as 50 million times. Electron microscopes have helped to determine the structure of viruses, test the operation of computer circuits, and reveal the effectiveness of new drugs.

“Electron microscopes can look at very tiny things on the atomic scale,” Lau said. “They are great. But historically, they look at things that are fixed in time. They’re not good at viewing moving targets,” she said.

In the last 15 years, laser-assisted electron microscopes made videos possible, but such systems have been complex and expensive. While these setups can capture events that last from nanoseconds (billionths of a second) to femtoseconds (quadrillionths of a second), a laboratory must often buy a newer microscope to accommodate this capability as well as a specialized laser, with a total investment that can run into the millions of dollars. A lab also needs in-house laser-physics expertise to help set up and operate such a system.

“Frankly, not everyone has that capacity,” Lau said.

In contrast, the retrofit enables TEMs of any age to make high-quality movies on the scale of picoseconds (trillionths of a second) by using a relatively simple “beam chopper.” In principle, the beam chopper can be used in any manufacturer’s TEM. To install it, NIST researchers open the microscope column directly under the electron source, insert the beam chopper and close up the microscope again. Lau and her colleagues have successfully retrofitted three TEMs of different capabilities and vintage.

Like a stroboscope, this beam chopper releases precisely timed pulses of electrons that can capture frames of important repeating or cyclic processes.

“Imagine a Ferris wheel, which moves in a cyclical and repeatable way,” Lau said. “If we’re recording it with a pinhole camera, it will look blurry. But we want to see individual cars. I can put a shutter in front of the pinhole camera so that the shutter speed matches the movement of the wheel. We can time the shutter to open whenever a designated car goes to the top. In this way I can make a stack of images that shows each car at the top of the Ferris wheel,” she said.

Like the light shutter, the beam chopper interrupts a continuous electron beam. But unlike the shutter, which has an aperture that opens and closes, this beam aperture stays open all the time, eliminating the need for a complex mechanical part.

Instead, the beam chopper generates a radio frequency (RF) electromagnetic wave in the direction of the electron beam. The wave causes the traveling electrons to behave “like corks bobbing up and down on the surface of a water wave,” Lau said.

Riding this wave, the electrons follow an undulating path as they approach the aperture. Most electrons are blocked except for the ones that are perfectly aligned with the aperture. The frequency of the RF wave is tunable, so that electrons hit the sample anywhere from 40 million to 12 billion times per second. As a result, researchers can capture important processes in the sample at time intervals from about a nanosecond to 10 picoseconds.

In this way, the NIST-retrofitted microscope can capture atom-scale details of the back-and-forth movements in tiny machines such as microelectromechanical systems (MEMS) and nanoelectromechanical systems (NEMS). It can potentially study the regularly repeating signals in antennas used for high-speed communications and probe the movement of electric currents in next-generation computer processors.

In one demo, the researchers wanted to prove that a retrofitted microscope functioned as it did before the retrofit. They imaged gold nanoparticles in both the traditional “continuous” mode and the pulsed beam mode. The images in the pulsed mode had comparable clarity and resolution to the still images.

“We designed it so it should be the same,” Lau said. 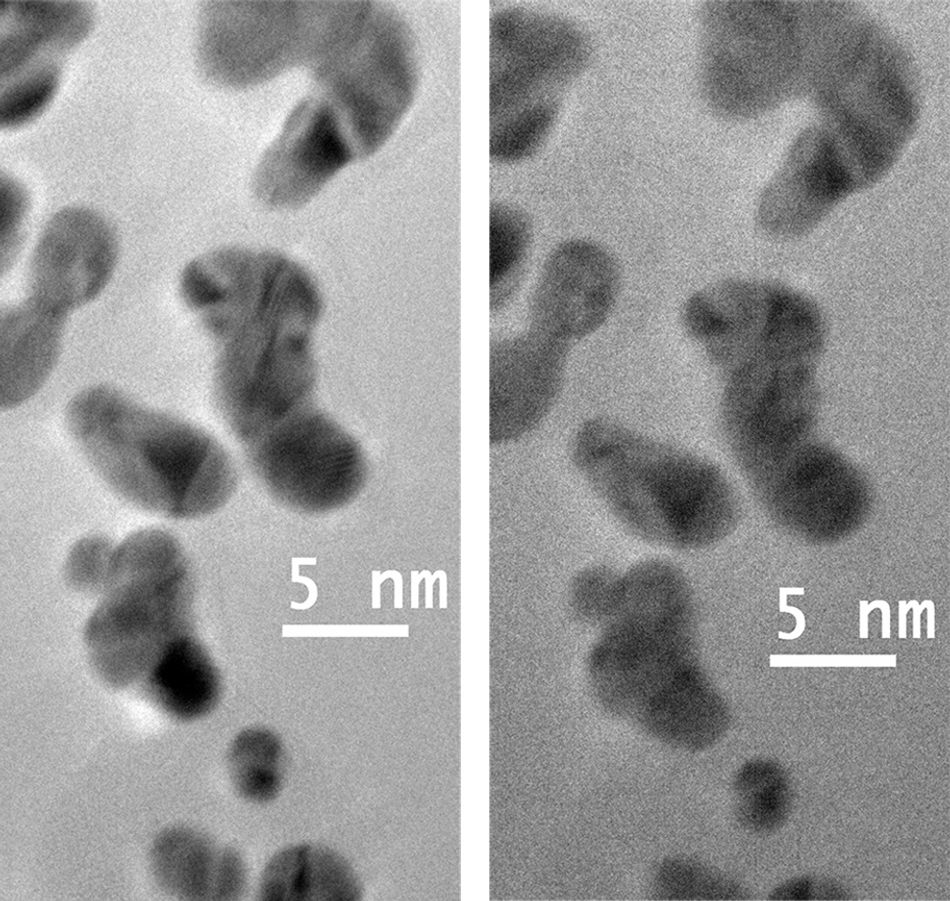 The beam chopper can also do double duty, pumping RF energy into the material sample and then taking pictures of the results. The researchers demonstrated this ability by injecting microwaves (a form of radio wave) into a metallic, comb-shaped MEMS device. The microwaves create electric fields within the MEMS device and cause the incoming pulses of electrons to deflect. These electron deflections enable researchers to build movies of the microwaves propagating through the MEMS comb.

Lau and her colleagues hope their invention can soon make new scientific discoveries. For example, it could investigate the behavior of quickly changing magnetic fields in molecular-scale memory devices that promise to store more information than before.

The researchers spent six years inventing and developing their beam chopper and have received several patents and an R&D 100 Award for their work. Co-authors in the work included Brookhaven National Laboratory in Upton, New York, and Euclid Techlabs in Bolingbrook, Illinois.

One of the things that makes Lau most proud is that their design can breathe new life into any TEM, including the 25-year-old unit that performed the latest demonstration. The design gives labs everywhere the potential to use their microscopes to capture important fast-moving processes in tomorrow’s materials.