The tactile joystick developed by Foldaway Haptics is not much larger than a credit card and can be set up and put away in the blink of an eye. This low-power device plugs directly into a computer or mobile phone to add another dimension to the applications they run. The force feedback lets users feel the texture, stiffness and shape of virtual objects. This little robot joystick, which clearly punches above its weight, has already been presented at a number of specialized trade shows.

Haptic-feedback systems, which are used mainly for gaming, hit the market a few years ago but had until recently disappointed users. They were just not very realistic in the way they simulated a collision by vibrating or imitated acceleration by increasing the feeling of resistance. “Systems offering more refined tactile force feedback have come out recently,” says Marco Salerno, the cofounder of Foldaway Haptics. “But they are bulky, hard to carry around and very expensive.” His company’s foldable joystick offers a very similar experience to that of the newer systems but is easy to stow in a laptop bag or even in your pocket.

With the help of a small magnet, this ultralight device opens up into a joystick with an upward flick of the wrist. It goes from flat – less than two millimeters thick – to three dimensions in a fraction of a second. It is stable and solid thanks to its origami-like folding mechanism and the composite materials used to make it. When closed, it is so flat that you may wonder where the sensors and motors are. It took several years of research in the Reconfigurable Robotics Laboratory for the researchers to overcome a number of technical challenges. 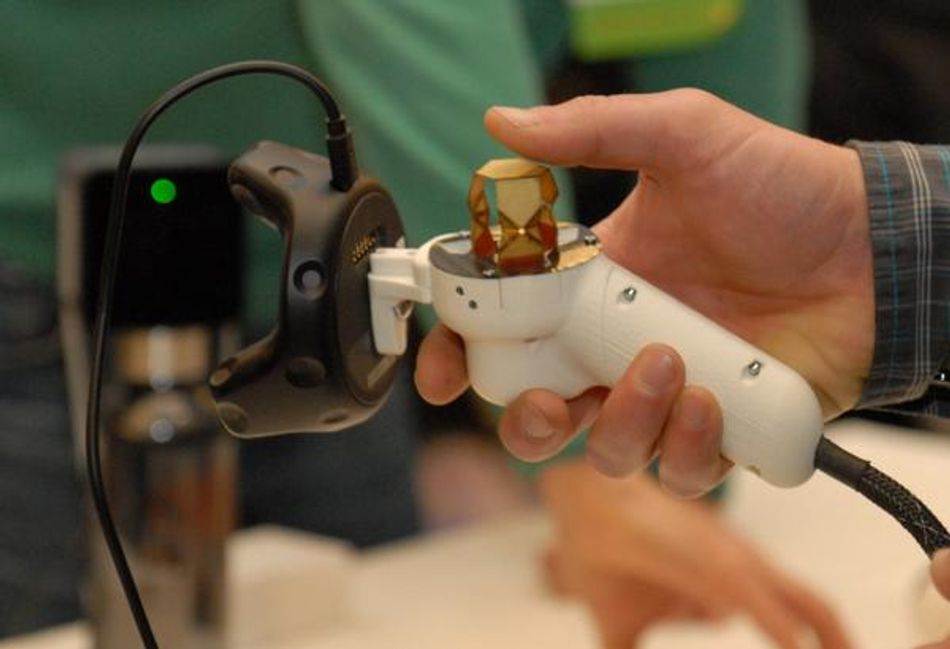 The little robot’s leading feature is the way it is manufactured, through a combination of thin layers of various materials already cut into the shape required for the folding mechanism to work. Because assembly is automated, it will be easy to mass-produce. “The fact that no manual action is required keeps manufacturing costs relatively low,” says Stefano Mintchev, the other cofounder of the startup.

The layer-by-layer manufacturing process means that the system can be configured in different sizes and shapes. The company used the same model to develop a retractable device that can be placed on VR joysticks. It’s called Foldaway Touch and lets users handle a virtual object and feel its shape and texture with their thumb.

The Robot Teleoperativo is a new robotics result achieved at IIT-Istituto Italiano di Tecnologia and combining the rugged locomotion of HyQReal robot with dexterous and powerful manipulation assured by a new robotic arm, controlled by immersive VR visualization and haptic teleoperation.