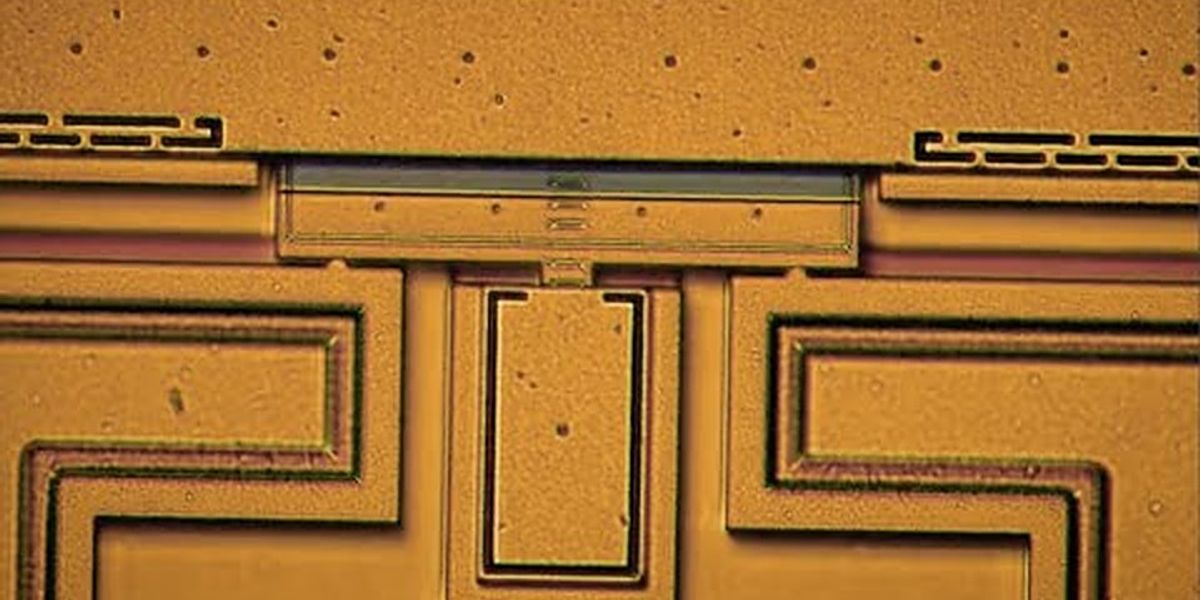 Maarten de Boer and Gianluca Piazza are developing reliable, mechanical switches the size of a DNA molecule, thanks to a $2M LEAP-HI grant from the National Science Foundation.

Electrical switches, mechanical devices that make and break the connection in an electric circuit, are used everywhere. They turn on and off our lights, dishwashers, and dryers. In circuit breakers, they interrupt dangerous levels of current. A different type of switch, in solid state form, is at the core of the digital logic that underlies computer technology. While these devices are in fact transistors that can operate as amplifiers like in a radio, in digital logic they act as switches to hold an “on” or “off” state, also known as “1” or “0.”

Digital switch technology has had such a transformational impact on society that its benefits transcend economists’ ability to quantify its value. Without transistor technology, we wouldn’t have computers, the internet, digital cameras, smart phones, or monitoring devices for vital signs or poisonous gases.

Wall light switches are the same size and have been manufactured in the same way as they were 50 years ago. But, solid state switches have shrunk by a factor of one million over the same time period, allowing billions of them to be used on computer chips.

Although solid state switches are extremely reliable, they can’t get much smaller. And, they tend to leak current, even when they are supposed to be “off.” Consequently, energy efficiency has decreased as solid state switches have gotten smaller. Because digital logic is so ubiquitous, a huge amount of energy is being wasted.

A possible solution to this problem is to go back to a mechanical switch, in which a gap  physically opens so that there is no leakage of current. However, mechanical switches are still about 10,000 times bigger than transistors, even when similar manufacturing processes as those of solid state batteries are used. Also problematic is their tendency to be much less reliable than solid state switches.

Researchers Maarten de Boer and Gianluca Piazza in Carnegie Mellon University’s College of Engineering are investigating how to overcome these challenges to develop reliable, nanoscale mechanical switches, also called nanorelays. Their work has been funded by a $2 million grant from the National Science Foundation’s Leading Engineering for America’s Prosperity, Health, and Infrastructure (LEAP-HI) program.

Because the problem is so complex, the researchers are breaking down the project into separate components. Piazza, a professor of electrical and computer engineering, is working on developing mechanical switches as small as modern solid state switches.

“Our goal is to build mechanical switches that are the size of a DNA molecule,” Piazza said. “To do so, we are using a solid state material that, when heated, undergoes a phase transformation and expands by 10%. That is approximately the same volume change that occurs when water freezes. This transformation results in enormous forces and sufficiently large displacements to bridge nanometer-scale gaps and form good electrical contacts as in wall light switches.”

De Boer, a professor of mechanical engineering, will focus on improving the switches’ reliability. He is collaborating with the University of Pennsylvania’s Robert Carpick who has expertise in examining nanometer-scale point contact behavior and the City University of Hong Kong’s  David Srolovitz, an expert in materials theory.

“Although simple in concept, the physics in a mechanical switch interface is complex, and interdisciplinary challenges must be addressed,” de Boer said. “Due to a small degree of surface roughness, the mechanical stress levels at the contacting surfaces are near the limit of what materials can tolerate.”

Although simple in concept, the physics in a mechanical switch interface is complex, and interdisciplinary challenges must be addressed.

“Hydrocarbons from the atmosphere can accumulate at the interface and increase electrical resistance,” he added. “The surfaces can become sticky and the switch may no longer open.  Solid state switches circumvent these problems but now are reaching their own limits, so the mechanical switch is now back in play. We will investigate conducting oxide materials as a way to address the issues.”

De Boer and Piazza are optimistic about an important, preliminary result where they demonstrated a scalable device architecture at the microscale. They presented the operation of this Phase Change NEMS Relay (PCNR) device at the IEEE 65th International Electron Devices Meeting in December, 2019.

The next steps are to extend this architecture to the nanoscale and to increase the cycle counts. If successful, the team expects the results to impact a range of electronic devices used for data storage, computing, and the Internet of Things.

“Our hope is that nanorelays can complement and enhance solid-state switches, which are now manufactured by some of the most advanced techniques known to society,” de Boer said. “We look forward to facing the challenges with a great team.”