How do you calculate the coordinated movements of two robot arms so they can accurately guide a highly flexible tool? ETH researchers have integrated all aspects of the optimisation calculations into an algorithm. The hot-wire cutter will be used, among other things, to develop building blocks for a mortar-free structure.

ETH computer scientists have developed a hot-wire cutting robot that guides highly flexible tools so precisely that it is able to carve a rabbit. (Video: ETH Zürich / The Computational Robotics Lab)

A newborn moves its arms and hands largely in an undirected and random manner. It has to learn how to coordinate them step by step. Years of practice are required to master the finely balanced movements of a violinist or calligrapher. It is therefore no surprise that the advanced calculations for the optimal movement of two robot arms to guide a tool precisely involve extremely challenging optimisation tasks. The complexity also increases greatly when the tool itself is not rigid, but flexible in all directions and bends differently depending on its position and movement.

Simon Dünser from Stelian Coros' research group at the Institute for Intelligent Interactive Systems has worked with other researchers to develop a hot-wire cutter robot with a wire that bends flexibly as it works. This allows it to create much more complex shapes in significantly fewer cuts than previous systems, where the electrically heatable wire is rigid and is thus only able to cut ruled surfaces from fusible plastics with a straight line at every point.

In contrast, the RoboCut from the ETH computer scientists is not limited to planes, cylinders, cones or saddle surfaces, but is also able to create grooves in a plastic block. The biggest advantage, however, is that the targeted bending of the wire means far fewer cuts are necessary than if the target shape had to be approximated using ruled surfaces. As a result, the bendable wire can be used to create the figure of a sitting rabbit from a polystyrene block through just ten cuts with wood carving-like accuracy. The outline of the rabbit becomes clearly recognisable after just two cuts.

In addition to the fundamental improvement on traditional hot-wire methods, the RoboCut project also has other specific application goals in mind. For example, in future the technology could be used in architecture to produce individual polystyrene moulds for concrete parts. This would enable a more varied design of façades and the development of new types of modular building systems.

For Dünser, the scientific challenges were the focus of the project. "The complex optimisation calculations are what make RoboCut special. These are needed to find the most efficient tool paths possible while melting the desired shape from the polystyrene block as precisely as possible," explains the scientist.

In order to move the wire in a controlled manner, it was attached to a two-armed Yumi robot from ABB. First, the reaction of the wire to the movements of the robot arms had to be calculated. Positions that would lead to unstable wire placement or where there was a risk of wire breakage were determined by means of simulations and then eliminated. 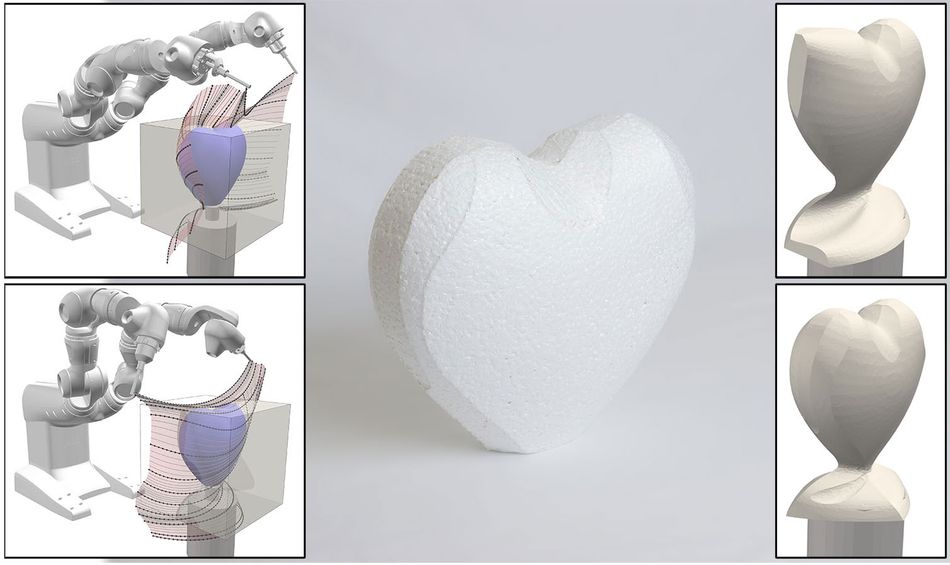 ETH researchers were then able to develop the actual optimisation on this basis. This had to take into account three linked aspects simultaneously. On the physical level, it was important to predict the controlled bending and movement of the wire in order to carry out the desired cuts. In terms of the shape, a cutting sequence had to be determined that would effect a highly precise approximation of the surface to the target shape in as few steps as possible. Finally, collisions with robot parts or its environment and unintentional cuts had to be ruled out.

Dünser is one of the first scientists to succeed in integrating all the parameters in this complex task into a global optimisation algorithm. To do this, he designed a structured methodology based on the primary objective that the wire should always cut as close as possible to the surface of the target object. All other restrictions were then assigned costs and these were optimised as a total.

Without further devices, however, such calculations always fall into local minima, which lead to a pointless end result. To prevent this, in a first step Dünser ironed out the cost function, so to speak, and began the calculation with a cut that was initially only roughly adapted to the target shape. The cutting simulation was then gradually brought closer towards the target shape until the desired accuracy was achieved.

The method developed by Dünser is not just limited to hot-wire cutting. The design of tool paths for other cutting and milling technologies could also benefit from it in the future. The method creates a much greater degree of scope for simulation, particularly in the generation of complex non-rotationally symmetrical shapes.

Electrical discharge machining with wires could benefit directly from this, as this technology enables high-precision cutting of electrically conductive materials via spark ablation. In the future, this could involve bendable electrode wires. This means that – as with the hot-wire cutting of plastics – more complicated and thus more efficient cuts can be made more easily than with today's rigid wires.

One specific application for RoboCut is being planned jointly with a research group from EPF Lausanne. With the help of a large-scale version of the hot-wire cutting robot, systematic building blocks for building structures free of mortar and fastening technologies will be developed. The elements themselves must hold together in a stable manner. In the future, the robot should also be used to cut the polystyrene moulds with which the various bricks are cast in concrete. The clever plastic cutter thus also creates the concrete construction technology of tomorrow.

Today's robotic arms are sleeker, smaller, and can operate in unstructured environments

A young DTU researcher has brought us one step closer to a kitchen robot that can help with cooking.

Get to Know RE2 Robotics

RE2 Robotics develops robotic manipulation systems with human-like performance, intuitive robot interfaces and advanced autonomy software that can operate in both indoor and outdoor environments..