Despite all the advances in consumer technology over the past decades, one component has remained frustratingly stagnant: the optical lens. Unlike electronic devices, which have gotten smaller and more efficient over the years, the design and underlying physics of today’s optical lenses haven’t changed much in about 3,000 years.

This challenge has caused a bottleneck in the development of next-generation optical systems such as wearable displays for virtual reality, which require compact, lightweight, and cost-effective components.

At the Harvard John A. Paulson School of Engineering and Applied Sciences (SEAS), a team of researchers led by Federico Capasso, the Robert L. Wallace Professor of Applied Physics and Vinton Hayes Senior Research Fellow in Electrical Engineering, has been developing the next generation of lenses that promise to open that bottleneck by replacing bulky curved lenses with a simple, flat surface that uses nanostructures to focus light.

In 2018, the Capasso’s team developed achromatic, aberration-free metalenses that work across the entire visible spectrum of light. But these lenses were only tens of microns in diameter, too small for practical use in VR and augmented reality systems.

Now, the researchers have developed a two-millimeter achromatic metalenses that can focus RGB (red, blue, green) colors without aberrations and developed a miniaturized display for virtual and augmented reality applications.

The research is published in Science Advances.

“This state-of-the-art lens opens a path to a new type of virtual reality platform and overcomes the bottleneck that has slowed the progress of new optical device,” said Capasso, the senior author of the paper.

“Using new physics and a new design principle, we have developed a flat lens to replace the bulky lenses of today’s optical devices,”  said Zhaoyi Li, a postdoctoral fellow at SEAS and first author of the paper. “This is the largest RGB-achromatic metalens to date and is a proof of concept that these lenses can be scaled up to centimeter size, mass produced, and integrated in commercial platforms.”

Like previous metalenses, this lens uses arrays of titanium dioxide nanofins to equally focus wavelengths of light and eliminate chromatic aberration. By engineering the shape and pattern of these nanoarrays, the researchers could control the focal length of red, green and blue color of light. To incorporate the lens into a VR system, the team developed a near-eye display using a method called fiber scanning. 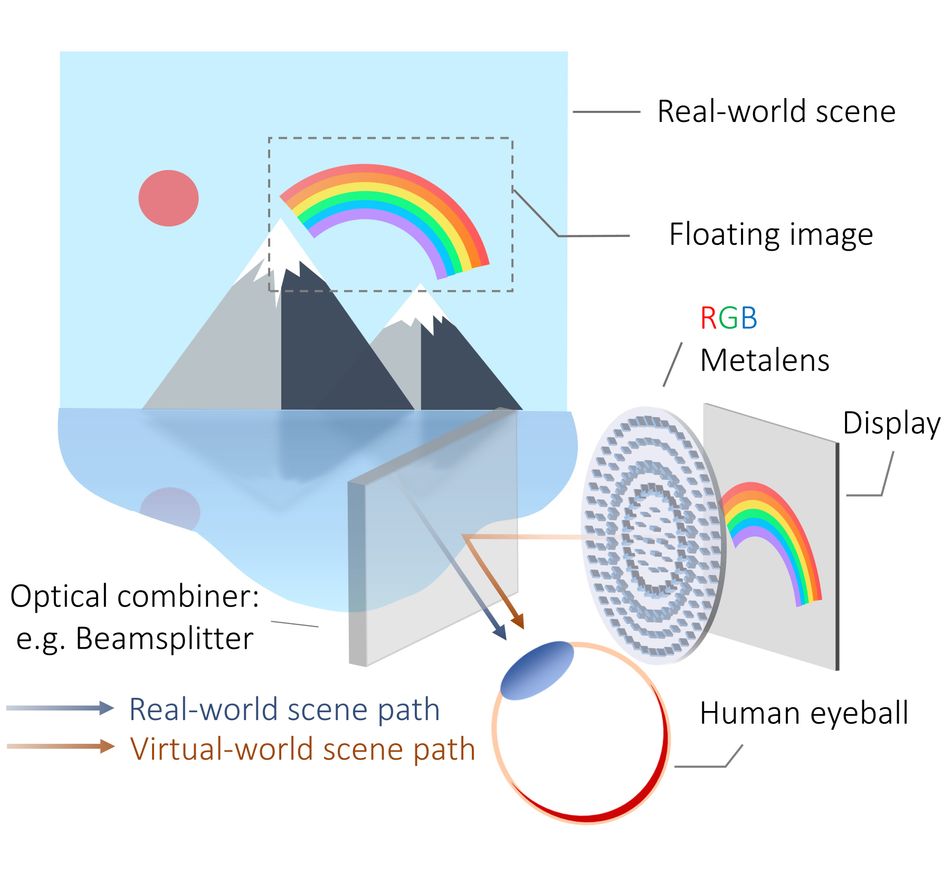 The display, inspired by fiber-scanning-based endoscopic bioimaging techniques, uses an optical fiber through a piezoelectric tube. When a voltage is applied onto the tube, the fiber tip scans left and right and up and down to display patterns, forming a miniaturized display. The display has high resolution, high brightness, high dynamic range, and wide color gamut.

In a VR or AR platform, the metalens would sit directly in front of the eye, and the display would sit within the focal plane of the metalens. The patterns scanned by the display are focused onto the retina, where the virtual image forms, with the help of the metalens. To the human eye, the image appears as part of the landscape in the AR mode, some distance from our actual eyes.

“We have demonstrated how meta-optics platforms can help resolve the bottleneck of current VR technologies and potentially be used in our daily life,” said Li.

Next, the team aims to scale up the lens even further, making it compatible with current large-scale fabrication techniques for mass production at a low cost.

The research was co-authored by Yao-Wei Huang, Joon-Suh Park, Wei Ting Chen, and Zhujun Shi from Harvard University, Peng Lin and Ji-Xin Cheng from Boston University, and Cheng-Wei Qiu from the National University of Singapore.

Software that helps us increase our mental strength

Which mental state do we need to be in to perform at our best? ETH Pioneer Fellow Marc Bächinger is working with Sarah Meissner to come up with the answer. Their technology, MyFlow, helps build mental strength. Together, they are about to launch their own start-​up.