These silver stripes with arched bridges were realized with the help of a supporting structure made of copper, which was subsequently etched away. (All photographs: Alain Reiser / ETH Zurich)

Researchers at ETH have developed a 3D printing technique by which micrometre-sized objects made of several metals can be produced with high spatial resolution.

3D printers can print almost anything these days, from production prototypes to artificial organs all the way to entire houses. Particularly on a microscopic scale, additive manufacturing, as 3D printing is also known, makes it possible to produce structures which cannot be realized using other techniques such as lithography. Up to now, a weak point of additive manufacturing has been the realization of metallic structures at the micrometre scale. A team of researchers at ETH Zurich led by Ralph Spolenak, professor at the Laboratory for Nanometallurgy of the Department of Materials, together with Dimos Poulikakos of the Department of Mechanical and Process Engineering as well as Renato Zenobi of the Department of Chemistry and Applied Biosciences, have now developed a technique that even allows one to print two metals at the same time with a spatial resolution of 250 nanometres.

Conventional methods for 3D-metal printing are ink based, which means that the desired metal is dissolved as nanoparticles in a suspension and delivered to a surface through a printing nozzle. An advantage of such inks is that they can be made with a variety of materials, but they also have important disadvantages. “Those techniques require a post-printing treatment that involves heating, which results in a shrinking and pronounced porosity of the material,” explains Alain Reiser, a PhD student in Spolenak’s group and first author of the study recently published in Nature Communications. “Typically, this means that the metallic structures are less conductive, mechanically unstable and, moreover, often contaminated with the organic compounds of the liquid solvent.”

To solve this problem, the researchers at ETH chose the direct route: the metals is no longer deposited as a nanoparticle, but rather transported in the shape of electrically charged metal ions. Those ions are created by applying an electric voltage to a “sacrificial anode” consisting of the desired metal inside the printing nozzle. The ions are then sprayed by electric forces inside a solvent onto the printing surface, where they lose their electric charge and reassemble as a metal.

The electrically charged metal ions are extracted from a sacrificial anode of the desired metal and then sprayed onto the printing surface by electrical forces. (Video: ETH Zurich)

The metals printed in this way are dense and have electrical and mechanical properties that are on a par with those of traditionally produced thin films. The new printing technique, moreover, offers a resolution of 250 nanometres with a printing speed of ten voxels per second (a voxel is a volume element, similarly to a pixel in 2D printing). This makes the technique ten times faster than existing electrochemical printing methods.

The new “electrohydrodynamic redox printing technique” has another crucial advantage, as Reiser points out: “By printing directly with metal ions, without the detour via an ink, we can even print two metals simultaneously or in alternation. This allows us to produce metal structures with locally controllable chemical, electrical or mechanical properties.” To achieve that, the researchers use a double printing nozzle, inside of which there are two different sacrificial anodes. Which metal to print when, where and in what concentration can now be controlled simply through the applied voltages.

Using a single printing nozzle also makes it easier to position both metals exactly. It is possible to switch between the two metals up to ten times per second. In that way, Spolenak and his collaborators were able, for example, to print tiny pillar measuring only 250 nanometres in width and which contained alternating sections made of copper and silver. By adjusting the composition of the two-metal alloy, the local porosity - and hence the stiffness and stability - of the nano-pillar could be precisely controlled. 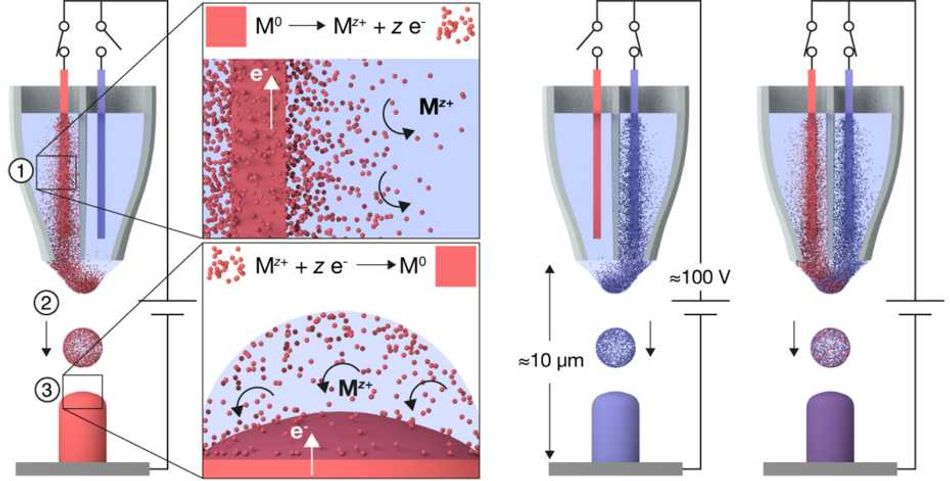 Working principle of 3D printing with metal ions. By applying appropriate voltages one can print, for instance, copper (left), silver (centre) or both metals at the same time (right).

A variety of applications

The new technique has a multitude of possible applications. The researchers at ETH are currently collaborating with experts on printed electronic circuits in order to produce extremely thin connecting wires to organic semiconductors using their 3D printing method. Furthermore, in the future they aim to extend the range of metals used (so far, copper, silver and gold have been tested) to include, for instance, magnetic materials. According to Reiser, in the long run the production of photosensors, printed integrated circuits and mechanical metamaterials should be possible.

Copper structure printed layer by layer with a spatial resolution of around 200 nanometres.

Chemical imaging of a printed 3D structure with a varying distribution of the elements in the alloy (red: copper, blue: silver). The local chemical properties can be controlled with a resolution of 250 nanometres during the printing process.

Silver nano-pillars: by etching copper away from the sections with a silver-copper alloy (yellow), their porosity was increased. In those places the material is less stable, which becomes visible when a force is applied (bottom figure).

An insulator made of two conductors

Nanosphere at the quantum limit

“Toughness” is a combination of an object’s strength (how easily it breaks) and ductility (how easily it deforms). In this way, toughness and impact resistance are one and the same – especially in material science, as toughness is a measure for how easily your part breaks upon impact.

In our latest 3D printing podcast episode, we talk to Danielle Glasbergen-Benning, who is an Application Development Specialist for DSM Additive Manufacturing.